Hey guys, it’s been a few months since our last post and a few things have happened. Krista and I worked on baton for a while, and this allowed us to experiment with some fun drills. The padded batons made it possible for us to practice at full speed, and challenge each other by taking advantage of any mistake our partner made. Secondly, I taught a friend for about a month who was completely green. The drill experimentation Krista and I were doing really helped me during these training periods since I went in knowing what I wanted to cover. Again, we used the padded batons and I would have the trainee perform as fast as he could, while also executing techniques successfully. I was very happy to see that by the end of several training sessions, he was mostly successful at parrying full speed strikes and was able to perform strikes quickly.

Now for the exciting news. 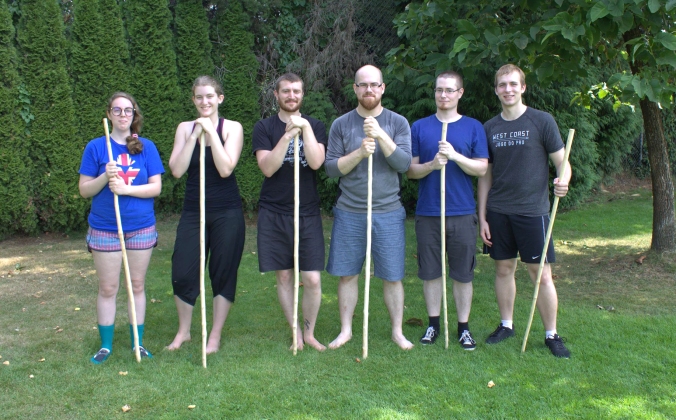 Krista made a shirt with the Westcoast JDP logo on it for my birthday, and it reminded me of what I wanted for JDP, which was to have a group of people who I could both teach and train with. So I started organizing and planning. I bought several staves leftover from a seminar Luis had at Academie Duello (they are absolutely fantastic, I think I will just make a post about them later rather than ramble on within these brackets). Then I created a Meetup group, which is a good platform to organize, and I contacted some people that had taken Luis’s earlier seminar. When you put all those ingredients together, you get the Meetups we’ve had the past three Sundays…

Each session has been a fantastic two hours with some great training partners. Since almost all of us knew JDP to a certain extent, I provided general structure on what we covered, rather than instruction. One of the trainees was new to JDP (they were given more detailed instruction), and they are certainly catching up to the group quickly.

Moving forward, I am going to host this Meetup every week at the same time, and anyone may come. I am looking at sourcing batons, and then I will add a baton session for those who wish to join. I am going to start advertising the group, and hopefully I will be able to introduce some new people to JDP. We can’t wait to see what this grows into!

One thought on “Meetups”

Quote of the Week

To avoid situations in which you might make mistakes may be the biggest mistake of all.
- Peter McWilliams